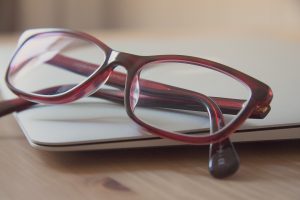 Dr. James E. Johnson started the Practice under the name VISION CENTER in 1969 following his retirement from the US Air Force. The first office was located on 7th Street near Mojave. By 1972 a larger facility was needed and the old “City Hall” of Victorville was acquired. The Union Street office was just across from Victor Valley High School. Vision therapy and routine eye exams were the main activities. A secondary office was located in Hesperia at “I” and Main.

Dr. Denton H. Wells joined the practice in April 1973. His specialties in contact lenses brought the first soft contact lenses to the High Desert. Low Vision therapy included telescopic and microscopic vision aids. Building on his vision training knowledge, he learned Dr. Johnson’s developmental vision techniques and the office became one of the largest vision therapy clinics in the World. The formal name changed to Optometric Vision Center but most knew us as Drs. Johnson and Wells.

Looking to expand further, Dr. W. Chris Newton was selected to join the practice in 1976. A “local boy”, Chris fit right in with the practice philosophies and ethics. He started work in the optical laboratory right after graduation and became a partner as soon as his license was granted. He worked in both the Victorville and Hesperia offices. We were now, informally, Drs. Johnson, Wells and Newton and continued with contact lens and vision therapy specialties.

Dr. Johnson retired in 1986 making us Drs. Wells and Newton. A decision to build a new office was made and land was purchased in a developing area of Victorville on Amargosa. Drs. Wells and Newton designed and supervised the building of the facility. Just as the ground-breaking ceremony was occurring, Dr. Stanley J. Sadorf was invited to join the practice. He had been the Optometrist at George AFB before transferring to Germany and to Norton AFB. The facility was completed just as Dr. Sadorf was granted an” early out” after serving the Air Force for seven years. Now we were Drs. Wells, Newton and Sadorf with specialties in contact lenses, refractive surgery, disease detection and management.

The Hesperia office was relocated to Main Street where we served the community until 1997 when we decided to close the secondary office and concentrate all our efforts at the main Victorville office.

Over the years, Desert Family Eye Care has continued to thrive as we have began our goodbyes to our beloved doctors. Dr. Sadorf retired at the end of December 2014, Dr. Newton retired at the end of December 2017, and Dr. Wells is retiring April 2018. Prior to Dr. Newton and Dr. Wells retiring, they brought on Dr. Bhavleen Jolly to join the practice. Dr. Jolly joined the business in 2017 and in August of 2017 began the process of purchasing the business from Drs. Wells and Newton.

Now the primary owner and doctor of Desert Family Eye Care, Dr. Jolly continues the tradition of giving the utmost care and treatment to all of our patients.

Desert Family Eye Care remains Best of the Deserts top Optometrist because we care deeply about our patients and are here to support them and their vision needs.